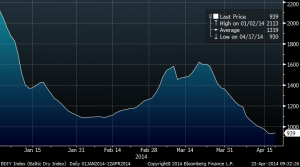 I mentioned it here. The Baltic Dry is showing that global trade is not improving while the fleet continues to grow.

It’s the same old scene… as Roxy Music would say. Too much supply, too little demand.

. Reported chartering data have been relatively flat compared to last year. Chartering has grown less than 1% pa in the past two years while fleet grwoth has exceeded 2.5% pa.

… But overcapacity is not addressed

The overall picture for the next two years is a moderation in the overcapacity increase, not an imprvement in the supply-demand balance. It is hard to see dayrates improving dramatically in such a scenario even if global chartering increases 5%.