(This article was published in Cotizalia on December 16th) 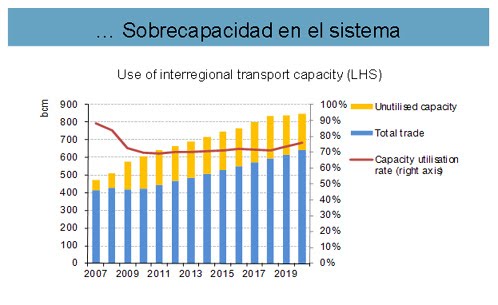 We discussed many months ago that the link between the price of natural gas compared to oil broke in mid-2006, reaching a historic high gap in 2010.

Why natural gas and oil have “de-linked”

a) Natural gas is used mainly for power generation and heating. Oil is used primarily for transport. Natural gas demand has suffered from falling electricity demand in the OECD, which has slowed down aggressively between 2007 and 2010, and most countries face problems of overcapacity in generation after the growth of renewables and thermal capacity. Meanwhile, oil demand has remained almost constant between 2007 and 2010.

b) The revolution of U.S. shale gas, which is approaching Europe from Poland, has increased the reserves of gas dramatically (and growing production in the U.S. by 15BCMs per annum despite Henry Hub trading at historic lows, between $4 and 4.5/MMBTU). Meanwhile, oil reserves, which have also grown with the discoveries of recent years, have not increased so dramatically even when in 2010, as was in 2009, we will have a global reserve replacement ratio exceeding 100%. 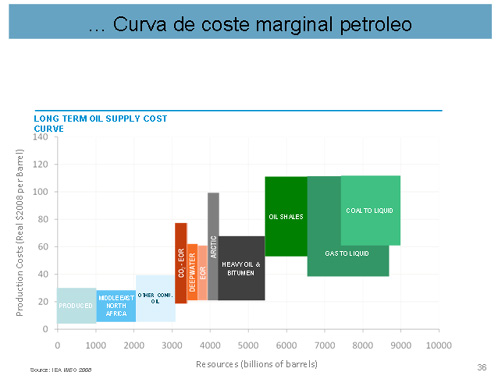 Of course the anti-oil lobbyists say that there are only 40 or 60 years of oil (depending on whether or not we include NGLs), but the reality is that there’s plenty of oil. Plenty but not necessarily “cheap”, if we assume $40-50/bl as benchmark. Because oil is very cheap indeed. One of the world’s cheapest and most productive liquids. In 1991 when I started in the oil industry people said there were just 20 years of reserves, and now there are 60 (proven). And after the discoveries of Brazil, we will continue to see a very solid replacement ratio. Wait till we see the results in the Arctic, new frontiers, etc …

d) Additionally, the price of natural gas has been affected by a very significant increase in liquefaction capacity (more than 15BCM per annum to 2013), while in the oil market supply challenges remain. Oil-on-sea stored in vessels was rapidly consumed in 2010, and despite OPEC claims of almost 5 million barrels a day of spare capacity, the supply-demand balance has tightened. 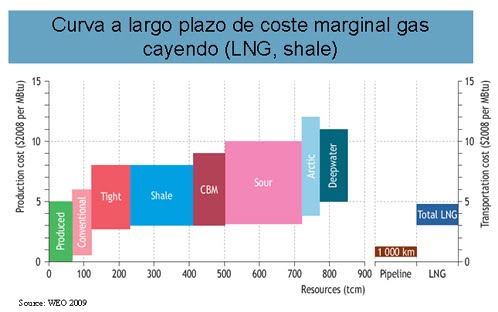 These fundamental shift in supply and demand fro both commodities has made companies enter a process of renegotiation of oil-linked long-term gas contracts to achieve a higher level of spot indexation, suited to a more cyclical and flexible power demand environment.

It is worth mentioning the huge difference between prices of liquefied natural gas sold to Europe or Asia. This shows how each gas market is very different and regional. On the other hand, the oil market is global and, despite talks of electric vehicles and other inventions, Asian demand and the traditional use of oil for transport will not vary dramatically.

In the fourth quarter of 2009 the average prices of LNG varied between $4.5/MMBTU (Spain) and $ 7/MMBTU (Korea). But between the second and fourth quarter of 2010, Asian demand and a colder winter have led liquefied natural gas prices to reach levels of $9/MMBTU (Spain, Japan and Korea). In oil, most countries are seeing that the price of crude in local currency remains very attractive, due to the collapse of the dollar, especially for China, whose dollar reserves fall in value every month. That is why demand has not fallen despite the poor economic environment when oil surpassed $90/bl. As the president of OPEC stated, oil is trading closer to $70-75/bl in constant dollars for them.

In summary, it is hard to foresee an environment in the short-term (1-2 years) where the difference between oil and gas will return to historic levels. While LNG capacity expands and shale gas advances, supply will continue to be well above demand. But in the medium term, the horizon is a little more positive.

If there has been something that has been shown in 2010 is that the natural gas market is suffering from less overcapacity than expected. And in the medium term, we can see that uncontracted demand for liquefied natural gas will likely exceed 10BCM in 2013, leaving the market balanced. This does not imply a massive price appreciation given the spare capacity in the system (Russia, Qatar, US-Europe shale), but the market is set to gradually tighten in gas, although at a slower pace than what we have seen in oil. Only a collapse in oil prices from unforeseen excess capacity or a switch in the use of oil for transport to gas could help close the gap.

1 thought on “Can Oil and Nat Gas go back to historical parity?”