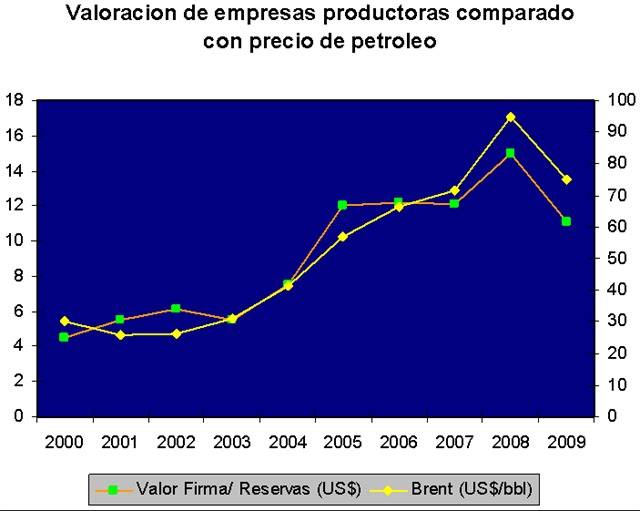 Graph above shows the valuation of independent E&Ps (EV/Core NAV) compared to Brent.

What an incredible week. Warren Buffett buys $60 million in Exxon shares, the independent E&P stocks (Dana, Dragon) rose to near-all-year highs on takeover speculation and we witness the evidence of what PetroChina said recently: the war for natural resources has only just begun. And the EU is losing.

While large European oil companies still fail to know what they will do to keep their businesses afloat if prices fall $1 or $2/bbl, the world is experiencing a revolution. So far in 2009, China has invested $16.5 billion to acquire oil assets. And what some disdained as excessive valuations has proven very reasonable, as PetroChina, Sinopec and CNOOC have demonstrated an exquisite discipline buying, but also by refusing opportunities.

Following are the Top-10 acquisitions by Chinese companies in the oil and gas sector so far in 2009. (Billions of US dollars)

You see, Europe’s efforts to invest in alternative energy and the electric car are very laudable and very necessary, but also very expensive, and even in the best case we should not lose sight of the importance of increasing access to natural resources . Especially when the International Energy Agency estimated that the use of electric vehicles in 2050 will not reach 35% of the worldwide fleet.

For me the problem is that the major oil companies are losing the best chance they ever had to buy relatively cheap assets and businesses in the OECD (see graph). For years we heard from Big Oil that E&P companies were too expensive, that they should wait for lower valuations to acquire assets. But that moment came in 2009, with the big oil companies full of cash and independents trading at historical lows … and they missed it.

However, China is demonstrating belief in the value of increasing its resources. But Exxon is now armed and ready. It has already placed a bid, rumoured at $ 4 billion for the assets of Kosmos in the Jubilee field in Ghana and continues to pursue attractive assets. As Rex Tillerson said, the company does not pursue crazy acquisitions, does not invest in political occurrences or areas that do not generate superior returns. And history shows it in their focus on the core business, a return on capital employed of 35%, share buyback of “only” $ 55 billion between 2008 and 2009 ($ 2 billion this fourth quarter!) And no debt, $2.9 billion net cash.

As Warren Buffett, Exxon knows that investing in cyclical assets with high debt clouds the ability to create long term value. And that’s what Warren Buffett has bought: a dirt-cheap stock, as he pays the total resources (72 billion barrels) at $4/bbl and pays zero for the chemical and refining businesses … but especially with the option to grow and buy without destroying the balance sheet.

In 2010 the figure of mergers and acquisitions, according to several companies and analysts, will reach $35 billion and may exceed $50 billion. Between PetroChina and Exxon they already have more reserves than all European listed companies together. The large integrated oil companies from France’s Total to Russia’s Rosneft, are unable to replace their reserves. 80% of global proven reserves are held by the producing countries. The little, very little that is left available, the independent companies with high exploration potential, will gradually fall inexorably. Those companies that lose this opportunity should not complain afterwards.