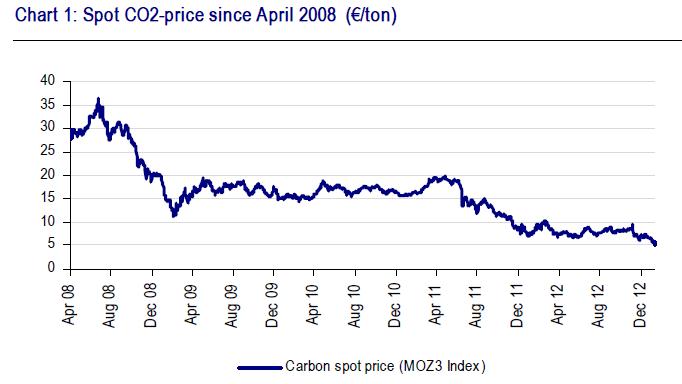 Is CO2 dead? This is something I have been warning for a few years now. The evidence is overwhelming. Flawed concept, massive oversupply of permits and politicians optimistic predictions. Great combination.

Now UBS has published a quick update on CO2 this morning given the price has reached an all time low of €4.9/mT.

2013 carbon price closed Friday at just above €5, an all time low for the third consecutive day and carbon is down 25% YTD (see chart, courtesy UBS)

In summary, governments will do again what they do best: mess up and try to intervene.

Pity that consumers don’t enjoy the benefit of low wholesale prices thanks to the enormous subsidies to renewables more than compensating the decrease in electricity, making consumer tariffs reach all-time highs as power prices collapse. Congratulations, another excellent EU policy.