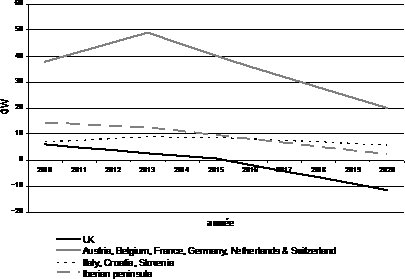 Reserve margins are clearly acceptable in Europe, even to 2015, assuming capex as planned. There is however a risk of excess capacity if the economic slowdown continues beyond 2010 and renewable investments continue growing aggressively yet nuclear lives are extended. Capex cuts in liberalized markets should take care of this and it becomes a defining factor to monitor as new strategy plans are unveiled. In my view, current forward curves are justified by supply management (including in this nuclear closures) and demand recovery. If we doubt the recovery of demand, I believe capex management will happen more abruptly than estimated as companies become more aware of their optimal gearing.

In the past three weeks we have received data from different banks using the UCTE adequacy reference report. The unanimous analysis is that reserve margins in Europe are adequate assuming there is growth in demand. The positive outcome could be that the progressive increase in renewable energy and gas puts upward pressure on power prices, as well as the gradual loss of base load generation (nuclear, hydro from lower rainfall) relative to the overall generation park. However, renewables have proven to be less “positive” for prices due to perceived overcapacity.

The sector spends c33% of its market cap on capex every year in the 2009-2012 period. I believe we have seen the peak of capex and a move into managing existing assets and returns.

The reason why the forward curves on spark spreads remains positive comes mainly from the perception that demand growth will return in 2010 (driven by return of industrial sector) to a level of 1.2% pa and the general perception of a good oligopolistic nature of the sector in Europe, where companies can manage output. The interesting thing is that with current capex the reserve margins in all of Europe are solid.

. CCGTs working at cash break-even to offset cost of take-or-pays.

. Demand flat beyond 2010 due to increased efficiency and lower industrial output.

In Europe under the conservative scenario used by UCTE, the adequacy reference margin rises from 50 to 59. More importantly, the “reliable available capacity” figure rises from 462GW to 521GW (a 1.1% annual increase for an expected total 1.5% annual demand growth).

This basically means that new capacity is expected to cover demand growth with no relevant impact in reserve margins. If demand does not return, capex cuts (or delays) can easily manage reserve margins in countries where companies control their investments with limited government intervention.

Two important facts to mention: a) Nuclear power availability comes down from 111.7GW to 96.7GW. This is because the UCTE assumes nuclear life will not be extended in Germany(where the reserve margin is expected to stay flat on new hard coal plants and renewables). B) renewable capacity seems underestimated. The estimate of EU increasing renewables (ex-Hydro) to 85GW seems very low. On my numbers we have 65GW of wind in European as at end 2008, with projections of 145GW by 2013. Today we have less than 10GW of PV but that could easily double or triple over the same period.

The worst country in terms of risk of overcapacity is Spain driven by the excessive installation of gas plants and renewables, driving reserve margins up c3% per annum, which basically assumed the optimistic demand scenarios Spain has enjoyed in the past. Portugal, and Italyto a lower extent, looks also at risk given the unnecessary roll-out of CCGTs and inflexible take-or-pays. This is a key element. As in Spain, companies have found difficulties renegotiating the terms of their gas contracts and take-or-pays remain at top of industry levels (75-25) despite some scattered successful gas contract re-negotiations (notably EDP with Sonatrach and Italians with ENI), but this is predominantly price more than volume.

Under normal weather conditions, France and Portugal would achieve comfortable reserve margin levels (13.3% and 13.90%, respectively) while Germany shows the tightest at 8.60%. Please bear in mind that German data differs between research.

In the UK, shut-downs of coal-fired power plants will not be entirely offset by new CCGTs, renewables and new nuclear (which will be brought into service no earlier than 2017). The reserve margin is tight but new nuclear explains the relatively modest forward curve.

Spain and Portugal look adequate even in severe conditions at reserve margin of 8.5% and 9.10% respectively. However, there looks to be a huge decline in Iberian spare capacity from 12GW in 2010 to around 5GW in 2020 (driven by Endesa and Gas-UNF cuts).

Germany’s adequate capacity depends entirely on nuclear life extensions. However, a likely scenario remains where new plants are delayed significantly, particularly for new entrants. InGermany there is a good chance of losing part of new build from the economic downturn.