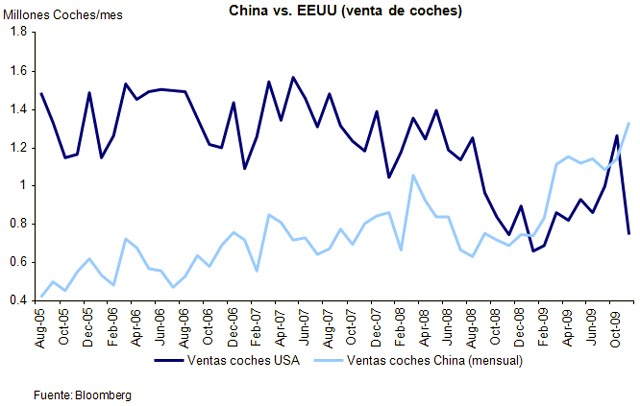 “Data from China is not credible.” This phrase and similar ones have led many funds, especially traditional ones, to miss part of the rally in stocks and commodities, to give just one example. It seems to me that in 2009 many suffered from a bit of excess of caution and a lot of looking at the growth data in the wrong places (USA, Europe). And it’s already more than a year since the launch of China’s economic stimulus program and the data continue to surprise on the rise.

In 2010, China’s GDP will grow c9%. But more importantly, it is likely to do so with very moderate inflation, around 2.5%, thanks to the fact that OECD countries will continue to be in a difficult economic environment and therefore, prices of products imported by China will probably not increase dramatically, as has happened with oil, coal and gas between 2008 and 2009.

Remember that China imports 3.6 million barrels per day of oil, and growing. Well, that consumption is only 2 barrels a year per capita, c4% of global demand. Meanwhile the U.S. remains about 24 barrels a year per capita, 24% of the total, but falling. This scenario, moderate rise in prices of imported commodities as high domestic growth is financed, is ideal for China to deliver long term economic growth and credit expansion without causing major inflationary moves, and that will likely generate the next local stock market rally. Do you remember Europe in 1950? The same.

Investments in fixed assets in the country will continue growing by c30% in 2010. Over 300 projects implemented on a large scale in 2009 lead me to think that we will see an increase in infrastructure investment over several years. This investment will force Chinese authorities to keep the current loose monetary policy at least for the medium term. Thus, according to several analysts, the figure of bank loans will double in three years. And this expansion of credit obviously generates a massive increase in consumption and spending power of families. The increase in disposable income is what is leading car sales to exceed U.S. figures, and we will see the same for other assets.

The important thing to remember is that the figures for 2009 are the result of a recovery from a downward cycle, and do not include the results of credit expansion and domestic demand, so China will be able to harness the greatest growth in its history without depending so much on exports and with relatively moderate inflation.
And what keeps me comfortably optimistic about Chinese stocks and those companies exposed to the growth of the country is this period of expansion, which coincides with the decline of the OECD, which makes it impossible for Western Central Banks to raise rates in a relevant way, and which will likely make investors increase exposure to risk assets. Alternatively we might lose the other 50% rally worrying about data from mature economies in decline.